Eldon Uptown/Downtown is a non-profit focused on bringing vibrancy back to the community’s commercial district. In 2017 the non-profit, led by Eldon resident Donna Jeffrey, received the buildings at 217 and 219 West Elm in Eldon as a donation. Prior, the buildings had sat empty for seven years. 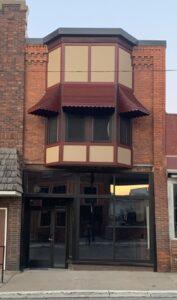 wn/Downtown was awarded a $30,000 Bright Ideas Community Enrichment Fund grant in the fall of 2019. In 2020 Iowa Economic Development Authority announced $2.6 million in Community Catalyst Building Remediation grants. Eldon Uptown/Downtown was one of 26 Iowa communities awarded funding, leveraging their $30,000 grant from the Legacy Foundation to receive $100,000 in grant funding from the state.

The restoration process presented challenges along the way. The back wall of 419 West Elm collapsed when an addition was removed, adding extra expense to the project. The town raised additional funds to cover the added cost, leading to a total investment in the buildings’ restoration of $155,000. The buildings are being restored to include two street-level retail spaces and upper-level housing.

When discussing the project, Jeffrey said, “Our group is very excited that a lease has been signed to use the restored building as a restaurant. The building housed a restaurant for eighty years or more, and many have wanted it to remain that way.”

Jeffrey sees the restoration of 417 and 419 West Main as a catalyst for further restoration in their commercial district. She hopes that by adding retail business, the community will also help grow tourism in the area.

The work completed by Jeffery and Eldon Uptown/Downtown earned her a spot on the Des Moines Register’s 15 people to watch in 2020. Read the full article here: https://www.desmoinesregister.com/story/news/2019/12/27/eldon-retail-tourism-energize-american-gothic-town-made-famous-by-grant-wood/2609212001/